The fjord, its capes and tides

The Véloroute du Fjord du Saguenay is a 435-kilometer long cycling circuit that skirts along the Saguenay River.

Meandering along the fjord’s twin banks, the course will introduce you to breathtaking landscapes. You’ll also travel along the Route du Fjord marked tourist route. Voyage from shore to shore with the Navettes maritimes du Fjord. Cycling fun for everyone!

The Kingdom of Saguenay invites you to discover sections south of Lac Saint-Jean to the Estuary of the St. Lawrence, criss-crossing the Saguenay Fjord along both shores. The Vélo-route du Fjord du Saguenay stretches between ham- lets and villages, crosses through the City of Saguenay’s urban areas, besides the phenomenally pictures- que rural sectors that connect the Véloroute des Bleuets with the mountainous landscapes of the Saguenay Fjord and the Laurentian mountain range.

The Saguenay triathlete, Pierre Lavoie, who revealed the fjord circuit’s incredible potential for athletes in search of a truly unique experience. Loved and revered across Québec, thousands of youth and adults who adopt his examples and advocate health through physical activity, Pierre Lavoie still travels this circuit as part of his training. It’s his personal playground! He devoted himself to the recognition of this exceptional cycling destination, managing to have paved shoulders landscaped along most of the trail.

“This circuit makes it possible to admire the 14 surrounding villages that are spectacular and ripe with authenticity, besides an exclusive glimpse of the boreal forest at its best. It then presents a challenging elevation gain for cyclists who love mountains similar to those in Europe. The tour around the fjord compares to the ascent of Mont Blanc! It’s without a doubt, throughout Québec, the course that most closely resembles Euro- pean preferences in terms of both difficulty and length. In addition, it also connects the neighbouring regions” stated Pierre Lavoie to the sum of his convictions. 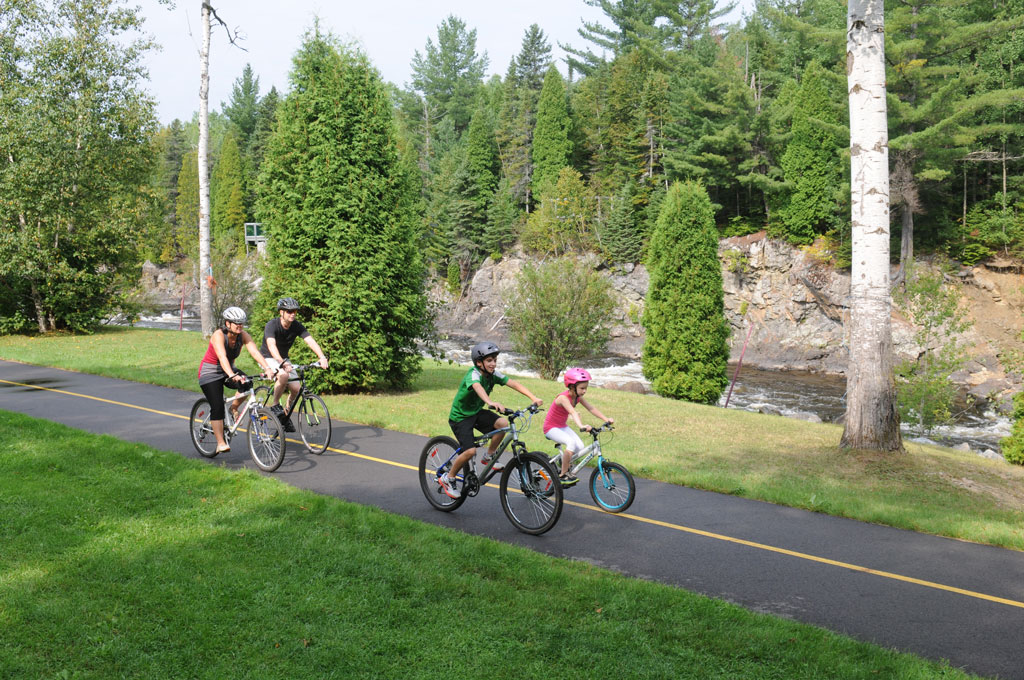 The Véloroute du Fjord du Saguenay also allows for a choice of desired sections by using the Navettes maritimes du Fjord, servicing the communities of Tadoussac to La Baie and transcending visitors to the core of this dazzling natural wonder, the Saguenay Fjord. The sections connecting the fjord and the lake have portions that are accessible to everyone: recreational cyclists (family), touring cyclists and performance cyclists. Your perfect adventure is waiting to be explored!

Meandering along the fjord’s twin banks, the course will introduce you to breathtaking landscapes. For more information about the Véloroute du Fjord du Saguenay, visit their website.


The Véloroute des Bleuets circuit encircles Lac Saint-Jean for 256 kilometers, crosses 15 municipalities and the Montagnais com- munity of Mashteuiatsh. The Parc national de la Pointe-Taillon and picturesque municipalities located along the country roads can be reached from this loop.


On the Véloroute of the Saguenay Fjord meandering along its two shores, you will discover breathtaking landscapes! Along the marked tourist route, the Route du Fjord, you will find pleasure and challenge! You can also travel from one bank to another thanks to Navettes maritimes du Fjord, shuttles allowing you to avoid the most difficult parts!


During your stay in the Saguenay–Lac-Saint-Jean region, you will be seduced by the breathtaking immensity and natural beauty of the Saguenay Fjord and Lake Saint-Jean. This destination of choice for outdoor adventure seekers has everything in place to enjoy the ideal vacation. The service, hospitality and an impressive variety of adventures, are all part of the parcel ready to make your stay unforgettable!

Most of the maps can be accessed via Garmin Connect

Download the Ondago application to see the interactives maps